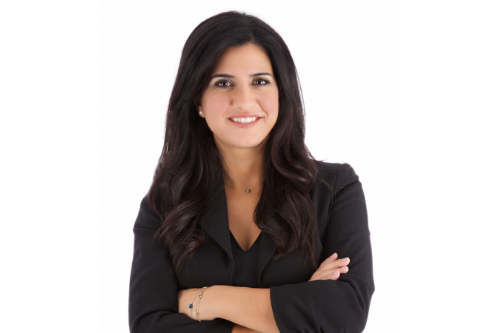 At 17, Iconomopoulos bought her first laptop, but quickly felt that the seller didn’t respect her very much. Undeterred, she went home, prepared her father for what they were going to ask and what price she hoped to pay, and tried again the next day with him as her spokesman. When the deal was closed, the shopkeeper told Iconomopoulos that if she had been there alone, she would not have received the same good price. While others might be downcast to hear this, Iconomopoulos looked him straight in the eye and said, “I know.”

“For me it was a moment of power – to have predicted this obstacle and found a way around it,” she said. “When I came up with a solution that gave me the result I wanted, in that moment I felt satisfied instead of being bullied.”

Many years later, Iconomopoulos found herself in an advisory position, where she was the only woman on the team and, at 10-15 years of age, the youngest. When a young woman with long hair, whose name she couldn’t pronounce, walked into a boardroom full of older, mostly white men, it led to rather ugly scenarios – Iconomopoulos recalls being asked, “What are you going to teach me, little girl? “But added that she rarely gets the little girl role again as she” has a few more gray hairs on her head “these days – but through a mix of practical and academic backgrounds she developed techniques that worked for her and it managed to get the respect from the people with whom they dealt.

“My mission is to make sure that I am always the one in power and knowledge is power to me,” said Iconomopoulos. “I want women to see things through a different lens and have the confidence to handle any kind of situation that comes their way. It doesn’t have to shake you up, define you, or make you feel weak. You can seize this moment, predict it and use it to your advantage. “

Iconomopoulos, who offers negotiation, communication and leadership coaching in her company, Forward Focusing, has written a book about her experiences and techniques and teaches part-time MBA negotiations at the Schulich School of Business in Toronto, also holds the final keynote, Challenging gender stereotypes and biases, at the upcoming Women in Insurance California event – and she knows exactly what she’s talking about.

Through her advisory or advisory work for corporate clients as well as through scientific examination of the subject, she knows that women are treated differently. There is bias everywhere, she said, and she hopes the event will get across that women should be more aware of their perceptions.

“As much as it sucks and I hate explaining it to people, we need to take this extra time to make sure we’re not misinterpreted,” she said. “That’s one of the reasons it can be so stressful being a woman in business. But the more we understand it, predict what will happen and develop techniques to cope with the situation, the less conflict we will experience. “

One of Iconomopoulos’ favorite tips is to ask questions instead of going into “storytelling” mode and saying straight out that the customer will never do that, for example. It’s not about asking permission with a “yes” or “no” question – that is, “can we do this?”. – but forces the other person to have a conversation. How do you think the customer will react to this? What do you think the consequences of X, Y and Z will be? Make the discussion more interactive and guide people to their conclusions without hurting their ego or giving away your power.

Another tip is to take a break. Several studies show that women generally use more words than men and keep talking more often to explain themselves. What if you made a statement and instead of working it out right away, let it ponder and digest it in silence? It’s a more confident approach that doesn’t invite common words like “unsure” and “overwhelming” that are often attributed to women.

“Make a concise statement – then shut up,” said Iconomopoulos. “Allow yourself to bask in the glory of confidence to say something so succinct.”

Through her work and research, Iconomopoulos reports a feeling that the tide is turning, which hopefully points to a faster way to overcome the gender bias that continues to plague women. When she first stepped into the business world, the women in front of her had an aura that said, “I had to go through this, so you have to,” but what she sees today are women who say, “We do it don’t have to compete for a seat at a table – how can we do more? How can we, women who come into the world of work, spare the negative experiences that we have had? “

“The advice I would like women to take away from my keynote address is that there is trust, just show up and know its worth,” said Iconomopoulos. “You don’t have to be a victim of gender bias, you can become the conqueror of gender bias – but it starts with knowing that you deserve to be in this room.”

To learn more from Fotini, join her and other inspirational speakers at the upcoming Women in Insurance California event.