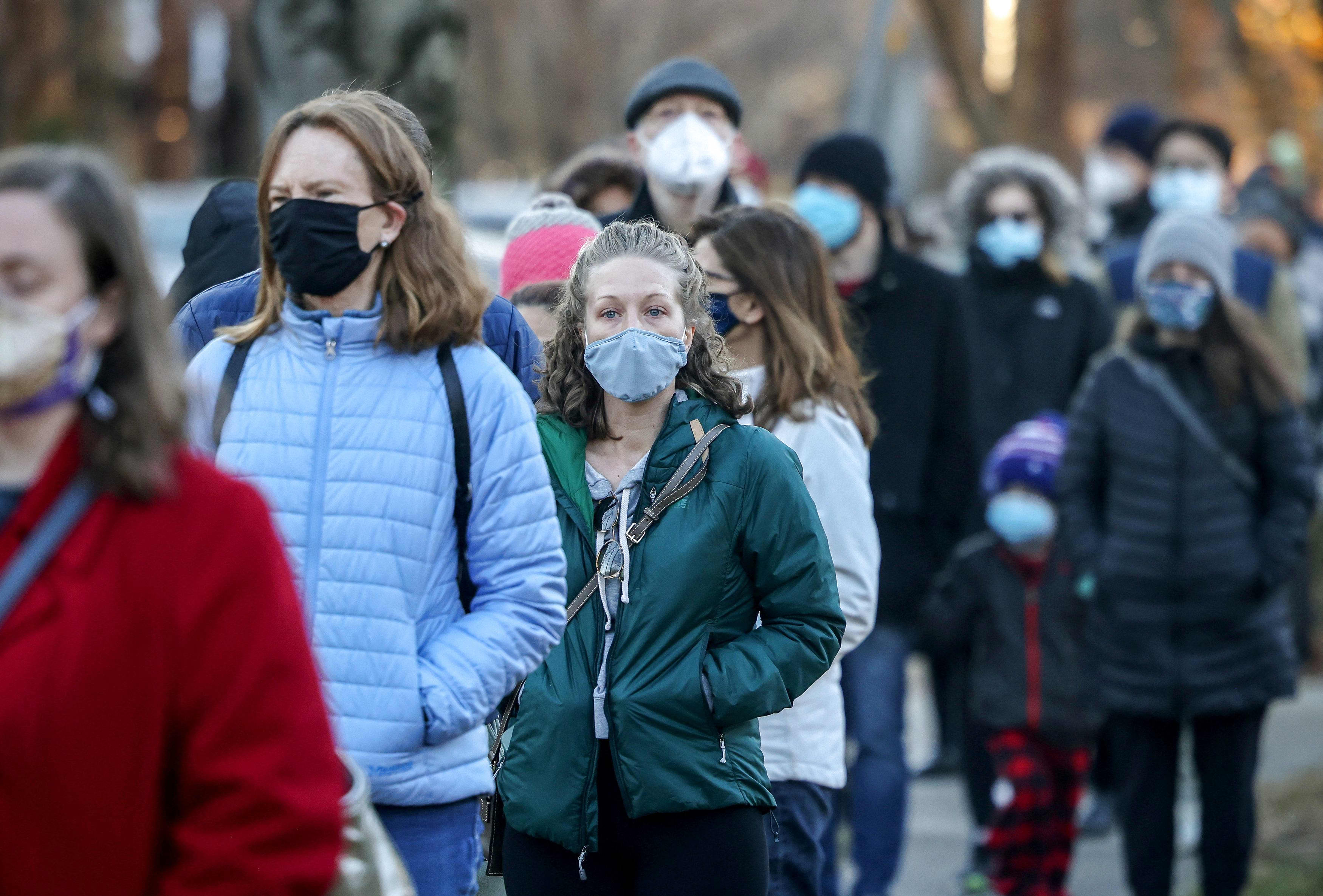 People wait in line at Union Station to be tested for COVID-19 on January 7, 2022 in Los Angeles, California.

A 35-year-old man returned to the United States from Wuhan, China on January 15, 2020 and developed a cough and fever.

He had read an alert from the Centers for Disease Control and Prevention about a novel coronavirus outbreak in Wuhan and four days later sought treatment at an emergency clinic in Snohomish County, Washington.

On January 21, the CDC publicly confirmed that he had the first known case of coronavirus in the United States, although the agency would later determine the virus had arrived on the West Coast as early as December after blood samples were tested for antibodies.

The man said he did not spend time at the Huanan Seafood Market in Wuhan, where a number of early cases were identified in December. He was admitted to the isolation ward at Providence Regional Medical Center in Everett, Washington for observation.

After confirming the case in Washington state, the CDC told the public that the risk “remains low at this time.” There is growing evidence of human-to-human transmission of the virus, the CDC said, but “it is unclear how easily this virus spreads between people.”

Then President Donald Trump told CNBC the US had it “completely under control.”

“It is a person who is from China. We have it under control. It’s going to be fine,” Trump told Squawk Box co-host Joe Kernen in an interview from the World Economic Forum in Davos, Switzerland.

dr However, Anthony Fauci would on Jan. 31 confirm the public’s worst fears: People could carry and spread the virus without showing symptoms. The research team of Dr. Helen Chu at the Seattle Flu Study began examining genomic data from Wuhan. It became clear early on that human-to-human transmission was occurring, Chu said. Using the flu study’s database of nasal swab samples, the team was able to identify another case of Covid in a 15-year-old who had not traveled recently, suggesting it is spreading throughout the community.

In late February, a senior CDC official, Dr. Nancy Messonnier that containing the virus at national borders is no longer feasible. There would be community spread in the US, she said, and the key question was “how many people in this country are going to have a serious illness.”

In the two years since that first confirmed case, the virus has ripped through the United States with a ferocity and persistence few expected. The human toll is staggering, with more than 860,000 dead and more than 69 million infections overall. Hospitals across the country have been stretched to the limit with more than 4 million admissions of confirmed Covid patients since August 2020, when the CDC began tracking hospitalizations. Hospitalizations are undercounted because they don’t include the wave of cases that first hit the US in spring 2020, when hospitals were caught off guard and testing was inadequate.

Although the US now has effective vaccines and therapeutics to combat Covid, the future trajectory of the pandemic remains uncertain as the virus mutates into new variants that are more easily transmissible and may evade immunization protection. The highly contagious Omicron variant has pushed infections and hospitalizations to record highs worldwide this month, shocking a weary public wanting a return to normal life after two years of lockdowns, event cancellations, working from home and mask and vaccination requirements.

The virus’ rapid evolution and subsequent dramatic waves of infection from alpha to delta and omicron came as a surprise to many elected leaders, public health officials and scientists. dr Michael Osterholm, a top epidemiologist, said the Covid mutations are the big unknown that will determine the future course of the pandemic.

“We don’t yet understand how these variants arise and what they’re capable of,” Osterholm, director of the Center for Infectious Disease Research and Policy in Minnesota, told CNBC. “Look at how omicron surprised us as a global community with rapid transmission, immune evasion. Look at Delta and all the impact it’s had on the severity of the disease,” he said.

As new infections fell in spring 2021 and vaccines became widely available, the US relaxed its vigilance. The CDC said the fully vaccinated individuals will no longer have to wear masks indoors. President Joe Biden announced on July 4 that the US is closer than ever to declaring independence from the virus.

However, the Delta variant was catching on in the US at the time and would soon cause a new wave of infections, hospitalizations and deaths as vaccination rates slowed. Public health leaders have struggled for months to convince skeptics to get the shots.

More than a year after the first vaccine was given in the US, about 67% of Americans over the age of 5 are fully vaccinated, according to CDC data. Tens of millions of Americans still haven’t gotten their vaccine, despite data proving it’s safe and effective in preventing serious illness and death.

“We had no sense of the divisive political and community response to this in January 2020,” Osterholm said. “Who could have imagined the kind of vaccine hesitancy and hostility that has occurred.”

Delta was more than twice as transmissible as previous variants, and research showed it caused more severe disease in unvaccinated individuals. The CDC would reverse its relaxed mask guidelines and encourage everyone, regardless of vaccination status, to wear masks in public in areas of significant transmission as Delta spreads.

Vaccines took a hit when omicron hit the market in November. Although they still protect against serious illness and death, they are less effective in preventing infection from Omicron. Chu said the U.S. has primarily relied on vaccines to prevent transmission of the virus, without equally emphasizing the widespread masking and testing needed to control a variant that can evade immunity, like Omicron are of crucial importance.

“We now know that you can get proportionally re-infected, you can have vaccine breakthroughs, and this virus will just keep mutating and elude us for a long time,” Chu said.

Katriona Shea is co-leading a team of researchers bringing together models to predict the trajectory of the pandemic. In their latest update, the Omicron wave of cases and hospitalizations is likely to peak before the end of the month. However, their most optimistic forecast is 16,000 to 98,000 additional deaths from the Omicron wave by April 2nd.

The effects of omicron on the further course of the pandemic are unclear. From a classic perspective, viruses evolve to become more transmissible and less severe, making it easier to find new hosts.

“There’s a lot of reason to think that might not be the case, since the jump to Omicron was so massive that it suggests there’s a lot of room for dramatic change,” said Shea, a professor of biology at Pennsylvania State University . Omicron has more than 30 mutations on the spike protein that binds to human cells. The shots target the spike protein, and the mutations make it harder for vaccine-induced antibodies to block infection.

“If this pattern continues and is repeated globally, we will likely see a complete decoupling of case and death rates, suggesting that Omicron could herald the end of the epidemic phase of the Covid pandemic and usher in its endemic phase,” wrote the explorers.

Over time, the virus could become less disruptive to society as mutations slow, and it will become milder as greater immunity in the population limits serious disease, according to Jennie Lavine, a computational testing biologist at biotech Karius.

The head of the World Health Organization, Dr. Tedros Adhanom Ghebreyesus, however, warned earlier this week that the pandemic was “far from over,” warning that new variants were likely to emerge as Omicron spreads rapidly around the world.

“Everyone wants to get to this thing called an endemic. I still don’t know what the hell that means.” Osterholm said, noting that he has 46 years of experience as an epidemiologist. “With variants, we can have relatively little activity for a while, as we’ve seen in many places around the world, and then a new variant could change all that overnight. We don’t really understand our future yet. “

The tip of 3G networks is an issue for hundreds of...

Alibaba Dismisses Worker Who Accused Her Boss of Rape