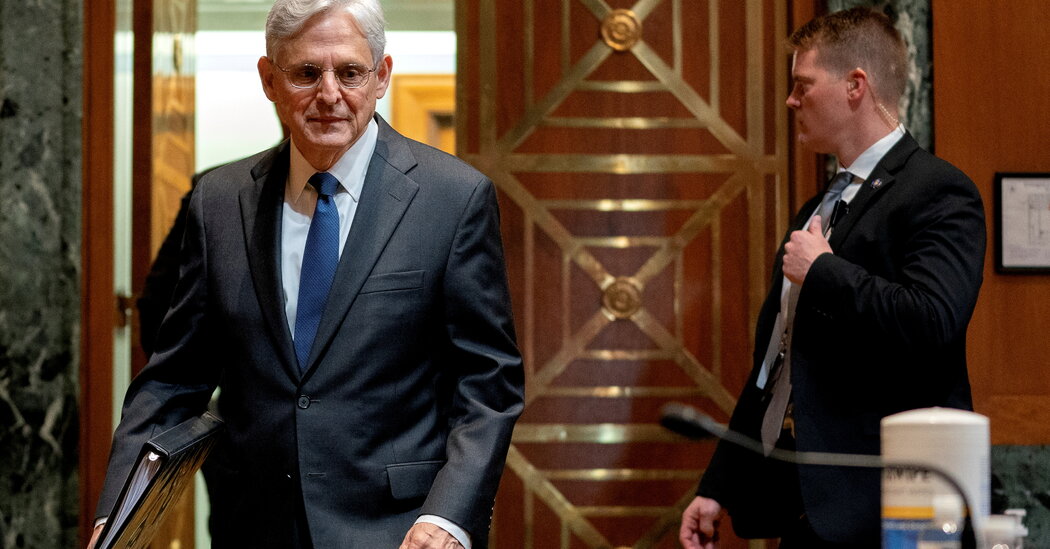 Attorney General Merrick Garland on Monday issued a sweeping ban on using subpoenas, warrants, or court orders to seize reporters’ records from their employers or communications firms to expose their confidential sources during leak investigations, and outlined sharp new boundaries for the practice.

“The Justice Department will no longer use any mandatory legal process to obtain information from, or records of, members of the news media engaged in news-gathering activities,” Mr Garland wrote on three pages to federal prosecutors’ policy note, adding that the department did too would revise their regulations to reflect the new limit.

The memo, which also prohibits compelling reporters to testify about their sources or release their notes, said the Justice Department would support laws to better protect reporters’ information to ensure it is kept under future administrations.

Mr. Garland’s memo contained a number of exceptions. This included a reporter being investigated for an unrelated crime; when a reporter is suspected of committing a crime such as “breaking and entering” to gather information; when the department tries to authenticate information that has already been released – a situation sometimes encountered on television news broadcasts of footage that may be evidence of a criminal offense; or when reporters themselves were viewed as agents of foreign power or members of foreign terrorist groups.

An exception also applies in situations in which the seizure of documents by reporters is deemed “necessary to avoid an imminent threat of death or serious injury, including acts of terrorism, kidnapping, certain crimes against minors” or attacks that affect critical infrastructures incapacitating or destroying it, Mr. Garland wrote.

The memo has been awaited since last month when President Biden pledged not to have reporters’ phone and email records confiscated amid revelations they made so late in the Trump administration on cases by The New York Times, The Washington Post and CNN.

Under previous regulations, prosecutors were required to obtain high-level permission to seize reporters’ data for leak detection, and they should generally notify news organizations in advance so that the scope of the request could be tried or challenged in court. But the attorney general or a small number of other senior officials could make exceptions.

Recently unsealed court records show that the Department of Justice made a secret attempt on December 22, 2020 to obtain court orders to seize email records from reporters at both The Times and The Post – the day before the then attorney general William P. Barr resigned from office.

Prosecutors were able to separately confiscate the reporters’ phone records without a court order. The department never received the email data, but the battle over it spanned the early Biden era and, in the case of The Times, included the extraordinary imposition of barring orders against lawyers and executives at the newspaper.

Those investigations were leaks in 2017. In a separate leak investigation, also uncovered this spring, the Trump-era Justice Department received the phone recordings and some email recordings from a CNN reporter.

Mr. Garland has embraced the idea of ​​ending such seizures in meetings with newsroom executives, and advocates of freedom of the press praised his memo as a major and significant change in the way the department operates under the administration of both parties.

Jameel Jaffer, director of the Knight First Amendment Institute at Columbia University, described the new policy as “an important step forward” while also calling it “critical” for Congress to put Mr. Garland’s rules into law.

“This will help journalists do the work we need of them – shedding light on government behavior, informing the public debate and holding those in power accountable – regardless of which party controls the executive,” he said in one Explanation.

Mr. Jaffer also noted that some questions related to how far the department will define and interpret some of the key terms in the new rules remain unanswered, such as: B. “News Collection” and gives them gaps that should be filled when the department issues their new prescription.

One ambiguity, he noted, is that the memo discusses a ban on mandatory legal instruments listed in the old regulation – subpoenas, arrest warrants, and court orders – but does not mention any other such instrument the department sometimes uses to keep records such as To receive communication protocols for inquiries about national security, so-called National Security Letter.

Nonetheless, the wording of Mr Garland’s memo suggested an answer to an open question raised by the government’s vow to restrict leak investigations to better protect reporters ‘ability to do their jobs: whether the policy would protect reporters’ records in situations where its source is suspected of being an outside hacker who has stolen information as opposed to a government insider who has leaked it.

According to the wording, a reporter’s files would apparently still be protected from confiscation under these circumstances. The memo states that the ban would apply whenever “a member of the news media only possessed or published government information, including classified information, in the course of news gathering”.

The new limits only apply to reporter records. Mr. Garland stated that the government will continue to be able to seize records from officials suspected of being the source of unauthorized disclosures.

In his memo, Mr. Garland noted that the Justice Department had previously conducted a “balancing test” that included some procedural restrictions on when prosecutors would confiscate reporters’ records and required senior officials to weigh up their interests in protecting the free flow of information to the press against the interest in gathering evidence that could solve crimes.

However, the Attorney General wrote that this approach had “flaws” and that the new policy should better protect journalists’ ability to do their jobs.

“The United States, of course, has an important national interest in protecting national security information from unauthorized disclosure,” he wrote. “But a balancing test may not adequately weight the important national interest in protecting journalists from the forced disclosure of information exposing their sources, sources they need to inform the American people about the workings of their government.”