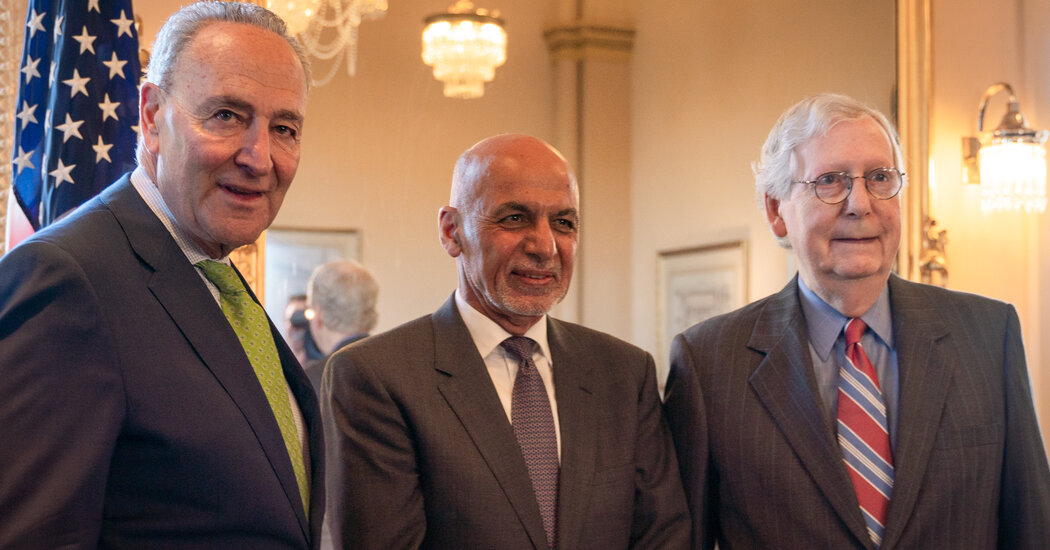 President Biden on Friday promised Ashraf Ghani, the Afghan President, that the United States would support a secure future for Afghanistan, a country that is increasingly threatened by violent insurrection after the withdrawal of American and international troops.

The Biden government has assured the Afghan leadership that it will continue to provide security, diplomatic and humanitarian aid as the Taliban advance against the Afghan government forces.

“Our troops may withdraw, but support for Afghanistan is not ending,” said Biden.

He also urged Mr. Ghani and Abdullah Abdullah, chairman of the Afghan High Council for National Reconciliation, to unite the country’s power brokers to repel the Taliban.

“You are doing important work to bring about unity among the Afghan leaders across the board,” said Biden. “Afghans will have to decide what they want about their future.”

He added that “senseless violence must stop”.

Mr Biden’s decision to withdraw American troops by September 11th is one of the most momentous of his presidency to date. And despite the deteriorating security situation, dire intelligence reports, and the likelihood of appalling images of human suffering, its message remains clear, officials say: The US military is withdrawing.

“It’s not going to be a happy conversation,” said Michael Kugelman, assistant director of the Asia program at the Wilson Center, a think tank in Washington. “Kabul has accepted US forces withdrawing, but it is hard to bear as the withdrawal is being played against an unprecedented Taliban offensive.”

At the White House, Mr. Biden attempted to reassure Mr. Ghani with $ 266 million in humanitarian aid and $ 3.3 billion in security aid. The government will also send oxygen supplies and three million doses of the Johnson & Johnson vaccine to Afghanistan, where fighting has hampered efforts to fight the coronavirus.

A small security force from the embassy will also remain behind.

“It was very clear to him that the Taliban would have fired at US troops again if we did not withdraw our troops, withdraw our troops from Afghanistan – something he has been talking about for a long time, something that has an interest and a desire”, said press secretary Jen Psaki on Friday.

The financial commitment gives Mr. Ghani’s government “a little space and authority over anyone who is now arguing and saying, ‘Can the central government protect me or do I have to break completely?'” Said Jason Dempsey, an extraordinary senior fellow at the Center for new american security.

In the Oval Office, Mr. Ghani expressed his gratitude.

“We are entering a new chapter in our relationship in which the United States’ partnership will be not military but comprehensive in terms of our mutual interest,” he said, adding that Afghan security forces retook six districts on Friday.

A day earlier, Mr Biden said his administration would begin relocating tens of thousands of Afghan interpreters, drivers and others who face retaliation for working with American forces and who have faced bureaucratic delays in obtaining special visas to take refuge grant the United States. Ms. Psaki confirmed on Friday that people in the pipeline would be eligible for visas even if they had fled Afghanistan.

Military planners and intelligence analysts agree that the growing strength of the Taliban and the planned withdrawal the Afghan government is expected to topple in six months to two years.

When asked about this information, Mr. Ghani smiled and said, “There have been many such predictions and they have all turned out to be wrong.”

But he also said Afghanistan is entering an “1861 moment,” a reference to when President Abraham Lincoln invaded besieged Washington and eventually saved the United States.

ETFs come to China with a vengeance

The Insurance coverage Trade Must Align on Finest Practices